The Villainous Ghetto: The Force of Naturalism in Stephen Crane’s Maggie

In Maggie: A Girl of the Streets, Stephen Crane writes, “The building quivered and creaked from the weight of humanity stamping about in its bowels” (6). Perhaps no other quotation so vividly demonstrates the naturalism that permeates this 1893 novella. Naturalism, a literary movement which emphasizes the impact of environment and heredity on one’s character, perhaps plays a more prominent role in Maggie than the characters themselves, who seem to function merely as cogs in a much darker machine. Through naturalism, Crane suggests that the ghetto makes individuals anonymous, animalistic, corrupt and victims of the environment. Crane’s daunting portrayal of a New York ghetto makes Maggie relevant to contemporary readers not only as a classic work of American literature but also as a social commentary. 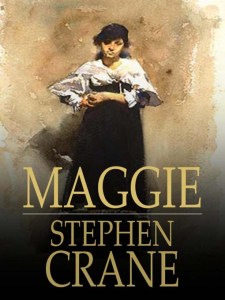 Crane uses naturalism to indicate that the ghetto makes individuals anonymous. In the first seven chapters, the lack of proper names and descriptions reflect the power of the ghetto to erase almost all traces of individuality. Rather than by name, Jimmie is first referenced as “a very little boy” and Maggie as “a small ragged girl” (Crane 3; Crane 6). Later, Jimmie and Maggie run to an “old woman” who is “gnarled and leathery” (10). Here the absence of a proper name and the presence of “gnarled and leathery” suggest that the ghetto has taken everything from this woman, including her name, leaving her with only her ugly appearance to distinguish her from her grimy surroundings. The text offers many more anonymous titles, such as “sullen-eyed man,” “blood-covered boy” and “little girl” (7). These epithets reflect the anonymity which the ghetto has assigned to these individuals. Sometimes, Crane refers to human beings by body parts, referring to “curious faces” appearing in the doorways (12). The synecdoche “faces” suggests that the ghetto does not merely lend anonymity to its inhabitants—alternatively, the ghetto disembodies its inhabitants, to such an extent that the face becomes a substitution for the human being.

With naturalism, Crane suggests that the ghetto makes human beings behave as animals would. Crane writes, “The woman screamed and shook her fists…she began to howl” (8). He goes on to write “she roared in reply” and “growled the little boy” (Crane 8). The verbs Crane chooses—“screamed,” “howl,” “roared,” “growled”—suggest that the ghetto causes human beings to behave in much the same way as animals. Jimmie, a product of the ghetto, has “blood-red dreams” as he watches women in the streets (Crane 14). The “blood-red” nature of these dreams possibly suggests a carnal, instinctive desire akin to that of an animal in heat. The following phrase “He menaced mankind” suggests that Jimmie exists outside of “mankind,” either elevating him to the status of a god (as he probably prefers to see himself) or lowering him to the status of an animal (which is more likely). Crane’s word choice reflects the power of the ghetto to cause human beings to behave as animals.

Through naturalism, Crane illustrates that the ghetto corrupts individuals. The ghetto corrupts not only Mary—who is described as “crimson” and a “sated villain”—bit also Jimmie (Crane 8; Crane 12). The “little boy” from chapter one becomes a man whose sneer “turned its glare upon all things” (Crane 14). Although Jimmie’s corruption—or, loss of innocence—at the hands of the ghetto is explicitly stated, Maggie’s loss of innocence is merely foreshadowed at this point in the novella. In chapter four, the death of the babe can foreshadow the loss of innocence that Maggie will experience later, as a result of life in the ghetto. Crane writes, “The babe, Tommie, died” (13). Here, the short, terse sentence structure serves as a physical illustration of a short, terse life in the ghetto. Also, the placement of the proper name after the common noun “babe” suggests that individuality—represented by the proper name—is secondary to one’s role in the ghetto—represented by “babe.” Crane goes on to write, “He went away in a white, insignificant coffin, his small waxen hand clutching a flower that the girl, Maggie, had stolen” (13). Often, a babe is associated with innocence and a flower is associated with growth or regeneration. However, in this context, the babe is dead and the flower is stolen and buried with the babe, suggesting that the ghetto results in the death of innocence and the death of potential for future growth or regeneration. In chapters five and six, Maggie’s loss of innocence is also foreshadowed by the progression from “blossomed” to “violated flowers,” which suggests that the ghetto will corrupt Maggie in the future.

Crane uses naturalism to suggest that the ghetto victimizes individuals. Crane’s word choice suggests that the ghetto can victimize human beings. Crane writes, “A dozen gruesome doorways gave up loads of babies to the street and the gutter” (6). In this quotation, the physical environment—represented here by “doorways”—directly causes the casting of “loads of babies”—some of the most vulnerable members of society—into the street. Babies, often associated with innocence, are casualties of a ruthless environment. Crane writes, “Withered persons, in curious postures of submission to something, sat smoking pipes” (6). These persons are victims of the environment just as the babies are, their bleak fate suggested by the adjective “withered,” which likens them to plants that die because they cannot withstand the inexorable forces of nature.

Through naturalism, Stephen Crane’s Maggie: A Girl of the Streets portrays the New York ghetto as an urban space in which only the fittest will survive. Characterized as a force of anonymity, animalism, corruption and victimization, the ghetto emerges as the antagonist in Crane’s novella, preying on characters’ weaknesses and crushing any hope of escape. Startlingly, Crane’s portrayal of an 1890s ghetto bears some striking similarities to our modern conception of a ghetto. Despite historical differences, inhabitants of both Crane’s ghetto and our modern ghetto are subjected to forces beyond their control and face the constant threat of dehumanization at the hands of the environment. Maggie has never been more relevant. Today, Crane’s novella emerges not only as a classic work of American literature, but also as a social commentary that applies just as much to our own society as it did to his. In the 21st century, we must continue to critically examine Maggie: A Girl of the Streets, not only for its artistic merit but also for its ability to reveal the ghetto—and the poverty it embodies—as the true villain of our society.