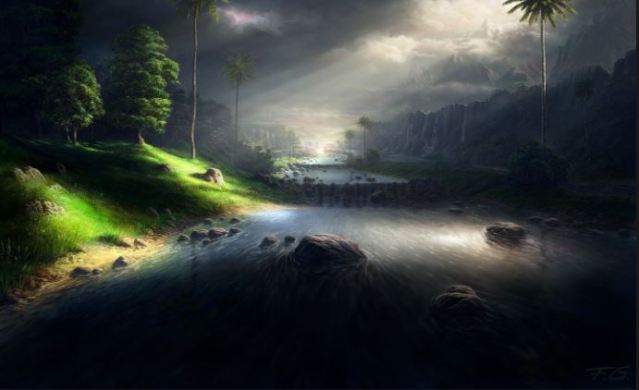 I
Dark is falling on the river,
on the milk of insects,
on eggs under the dockleaves,

such dark as the long evening permits. The air is tart
with the scent of herbs of forgetfulness,
spores that rest under the eyelids, swimming in a fluid
of incantation: swaying grasses, bodies of the shore.

At a bend that turns its back
on a ribbon of lights, the dark is a mine
of sounds unknowable, dizzying; where memories overrun
the certainty of feet shifting, reaching and correcting.

These are days that will not come again, days famous
in their rolling out the future; final days
when the river will roll unseen and backwaters
alter in the mind
like the weight of an orchestral phrase,

a pale gable hidden where autumnal women coaxed
a bonfire to spit against the flight of day.

II
Too many words, things, intensities.
Colours have merged into a tautness of heat,
cows moving away and joining the herd are blobs
of mercury. Is this the end of wonder,
air a canvas of lost days, the distance
thinned like beaten silver?

Beyond the field, church spires like sentences
reject the medieval. There is no sanctuary.
The only promise is of sullen air
dispersing mane and plume to fern and fountain,
town lights a mushroom cap of cloudburst orange.

Rounding a bend we come across a stretch
of cutaway reeds, an inlet grey on gold
in the afterstorm light. And we are in
a hollow; there are no houses to be seen,
no poles; the torrent’s flotsam is like traffic
gazed at through a wide window; a log rolls,
its stump a dipping fin. And the only sound
is air sucking at boots,
the river’s hum become its own stillness.

There will be other days like this,
you tell yourself, though this the first
gives the possible lie. – But haven’t we been here before? –
the young man’s certainty, slowly assaulted,
not yet crumbled. The smell of sodden earth,
old leaves gathered, rank as a burst plum,
hint at a lingering seamlessness, time a stream
washing through the stooped mind.

And you wait for the distant, read-of bell
ringing from a place where things should be,
where they are mentioned, but in passing.
We pause, the unspoken rhetoric
of expectation loud in our looking out
where at the far bank, no water moves.

Ted Mc Carthy is a poet and translator living in Clones, Ireland. His work has appeared in magazines in Ireland, the UK, Germany, the USA, Canada and Australia. He has had two collections published, ‘November Wedding’, and ‘Beverly Downs’.
His work can be found on http://www.tedmccarthyspoetry.weebly.com