Beyond Pipes and Dreams, an Inspirational story of Vithal Balkrishna Gandhi

Beyond Pipes and Dreams by Leena Gandhi Tewari is a biography of her late husband.  “Many 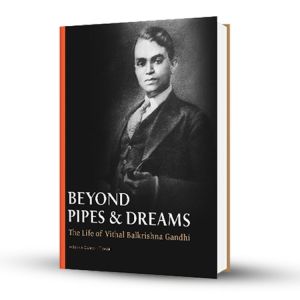 years ago (seven to be precise) I embarked on a journey to discover my roots and to pen down what I thought is the most significant ‘chapter’ in the history of my family. I completed this journey with the release of a biography titled “Beyond Pipes & Dreams-The Life of Vithal Balkrishna Gandhi on my grandfather who rose from poverty to beat the odds and emerge as a respected freedom fighter and a visionary leader,” Leena writes.

He became a Member of Parliament in the early days of Independence. As a Congress MP under Jawaharlal Nehru, he was a key figure in the debates, which led to several laws, and practices Indians take for granted today. Among the many important positions he held in the 1950s, Mr. Gandhi was Chairman of the Public Accounts Committee and a Member of the Central Pay Commission. He worked closely with the great patriots of India’s Independence movement and leaders of free India.

“Vithal Gandhi was also a self-made businessman. He founded a pharmaceutical company USV Ltd which is a leader in diabetes and among the top 20 in the industry. I am proud to carry his values and vision forward as Chairperson of this company,” she further adds.

His story is woven with historic times of British rule, Independence and the building of our nation.

Join 5,928 other followers
Assignmentgeek.com Homework assistance created for you
Thesishelpers.com can write your thesis.