Conflict in Achebe’s Arrow of God

Take care then, mother’s son,
lest you become a dancer disinherited in mid dance

These lucid lines provide the justification for the cacophony of various intertwined conflicts in Chinua Achebe’s Arrow of God. The principal message conveyed through Umuaro’s political conflict with Okperi, the religious conflict with the ‘Church’, and the cultural conflict with ‘the white man’ is the importance of conforming to the laws of the society that one belongs to. However, these external conflicts are mere manifestations of the war raging inside the protagonist, the Chief Priest, Ezeulu. The novel suggests the idea that he and his culture are one, and therefore Arrow of God is not so much concerned with the society as with Ezeulu himself. 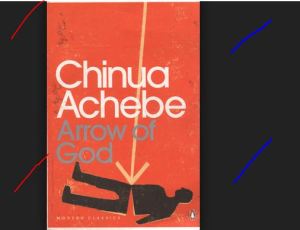 Arrow of God is set in the early 20th century when the Englishman had taken up the white man’s burden to colonize the uncivilized villages of Africa. Although the conflict between the colonizer and the colonized has dominated many novels of the time, here the white man merely functions as a catalyst. His acts of oppression cause the natives to create a disillusioned construct of the colonizer. ‘From the stories told of the white man it had not occurred to them that he could be sick like ordinary people. (Achebe 165)

However, his acts of intervention cause such great turbulence in the structure of the clan, that they overshadow the impeding conflict with the colonizer. Mr. Winterbottom’s interference in the civil war between Umuaro and Okperi calls for the Ezeulu’s testimony against his own village. When the ideology of loyalty to one’s clan is dismissed, the elements of dissonance intensify into a conflict. Thus the preexisting discord between Ezeulu’s deity and the older deities was transformed into a conflict by the intervention of colonial powers.

Ezeulu’s plea against war with Okperi having been overruled by the villagers in favour of his rival, Nfaka, it causes him to question the validity of the political extension of his religious power. This internal turmoil regarding his place in society stems from the common knowledge that the honour of being the Chief Priest was attributed to a ‘weak’ member. David Cook presents his view on the distribution of power on the basis of one’s role in his book, African Literature, A Critical View. The novel searches into the limits of individual power in a system controlled by tradition. (Cook 18)However, Ezeulu, not satisfied with being the mere ‘watchman’ who announces the festivals to the clan, wishes to extend his power to consolidating the clan under his command. Thus, what motivates him is the deep rooted fear of what he lacks: power.

The colonizer has no regard for the culture of the colonized. The traditional beliefs forbid the Chief Priest from travelling a great distance away from his home. Ignorant of this norm, Mr. Winterbottom summons Ezeulu to his office in Okperi. Enraged by Ezeulu’s refusal to comply, he detains Ezeulu in prison. This act causes the miscrocosm to take precedence over the macrocosm. Ezeulu’s conflict with his own personal boundaries for accreditation of power is brought out in its most explicit form during his stay in the prison. His refusal to accept the position of Chieftaincy transforms the quest for power into the quest for revenge.

Having been denied political power, Ezeulu uses his command as the ‘watchman’ by refusing to announce the ‘New Yam’ festival. He is convinced that this is Ulu’s divine intervention and not his own act of revenge. The intervention of Ulu’s spirit was clearly Ezeulu’s surrender to the irrational. ‘It was a fight of the gods. He was no more than an arrow in the bough of his god.’ (Achebe 193) Terrorized by the impending famine, the leaders of Umuaro assert their power and insist that he beseech Ulu, and ask for forgiveness for their sins so that they may harvest the yams. ‘Do you think there is another Umuaro outside the hut now? No, you are Umuaro.’ said Ezeule. (Achebe 210)

When he entered the shrine of Ulu, the toll of the Church bell seemed to have chased away to call of Ulu. This is the manifestation of his intrapersonal religious conflict. Threatened by the rival religion, he had sent Oduche to join the Church so that Oduche may ‘bring home his share’. Oduche, however is mesmerized by the new religion and therefore the seeds of Christianity are sown in the very courtyard of the Chief Priest of the ancient religion. The struggle between tradition and change permeates the household as a family feud. The contesting ideologies are brought to the forefront by Oduche’s act of entrapping a python. While Umuaro worshipped the python, its infiltrators condemned it for its evil representation in Genesis.

The failure to hear the call of Ulu brings forth the most crucial conflict: the conflict with the self. During the festival of Pumpkin Leaves, the left half of Ezeulu’s body would be painted white so that he may embody the spirit. This ability to bridge the spirit and human world should have blessed him with peace and harmony. However, through the course of the novel, Ezeulu is at war with himself. The paradox of the conflict between the spirit and the human entrapped within the Chief Priest himself is the most enthralling element of the novel. Ezeulu’s most vicious enemy is his own self. “A priest like Ezeulu leads a god to ruin himself.” “Or perhaps a god like Ulu leads a priest to ruin himself” (Achebe 215)

Thus the dependence on the deity is the greatest threat to his authority. Therefore, through the conflict with the colonizer, he clashes with the society for the resolution of the preexistent inner turmoil. The building theme of madness culminates in the death of Obeika. In Ezeulu’s unremitting war with himself, he fails to realize that man cannot live by spirit alone. He is reminded of physical reality when Obeika’s health fails him while running as the night spirit. The jolt of reality, instead of delivering Ezeulu to the real world, takes away his last streak of sanity and condemns him to the same fate as his mother.

The ancestral religion was the cohesive force that bound together every aspect of life within the traditional society. However, when the symbol of the religion himself lost his hold, tradition had to dissolve to make room for change. It was the bell of the church that rang order in the anarchy caused by the loss of God. Mr Goodcountry asked the natives to bring their offerings of yam to the Christian God in order to restore order in their lives. Thus it was the Ezeulu’s conflict that tore down the ancient religion.

No man however great, can win judgment against the clan.