When Russell Brand admits to be an ‘addict’, help is just around the corner 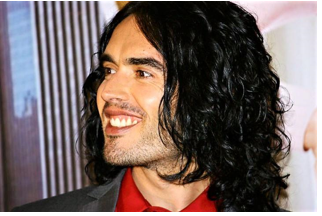 Comedian Russell Brand explains: “The reason I became a drug addict is that all throughout my life I felt this sense of irritation, agitation, this emptiness…

I found every progressive drug: cannabis, LSD, crack, heroin. Each of them is greeted as tiny little powdery prophets, solutions to the problem of my inner angst.

None of them work.” (https://youtu.be/VXSIvShLujM )

Today we have a crisis in drug addiction care: less than one in five Americans with drug abuse problems receive any help (https://bit.ly/2G9O2Nl ).  Little do they know, all the rest can get rapid, available, effective and affordable tools to escape these painful, costly and even life-threatening attachments.

According to SAMHSA’s National Survey on Drug Use and Health, 20.1 million people (7.7 percent of the U.S. population) aged 12 or older needed treatment for an illicit drug or alcohol use problem in 2016. Only 3.8 million (19 percent of those who needed treatment) received any substance use treatment in the same year. (https://bit.ly/2G9O2Nl ).

According to US News in December, 2016, (https://bit.ly/2JuAsup ) the Surgeon General reported that in 2015 the United States had a staggering $442 billion dollar loss to its national economy from drug and alcohol abuse. https://addiction.surgeongeneral.gov/executive-summary

According to National Institutes of Health, the average treatment (for veterans) for substance abuse costs $3,754 with a 75.0% chance of being effective. https://bit.ly/2JvhB2p

Some people start drugs for a new “high,” others to overcome pain or discomfort; some athletes use drugs to enhance performance; others take up drugs out of curiosity. For whatever reason one tries and becomes addicted to drugs, the addiction is considered a brain disorder that can change the structure of the brain and how it works, according to the National Institute of Drug Abuse (https://www.drugabuse.gov/publications/drugs-brains-behavior-science-addiction/drug-abuse-addiction ).

If one has been in a traumatic event, drug and alcohol “self-medication” often accompanies Post-Traumatic Stress Disorder (PTSD). It can also be understood as one of the symptoms of PTSD. (For more stories and information on our projects to reduce the pandemic of PTSD across Africa, go to www.ptsdreliefnow.org )

Without support, drug addiction often leads to harmful behaviors, and mental and physical health debilitation. The Surgeon General explained that “Neighborhoods and communities as a whole are also suffering as a result of alcohol- and drug-related crime and violence, abuse and neglect of children, and the increased costs of health care associated with substance misuse.” https://bit.ly/2JuAsup

According to the U.S. National Institute on Drug Abuse ( https://bit.ly/2aKNEei  ), the 20% who do get support use a variety of approaches:

The goals of these approaches are to first become drug free, then stay drug free, and over the long-run be a happy and productive member of family and society.

There are many complementary and alternative (CAM) approaches that with help change the quality of life and achieve the above goals… including exercise, diet, and better patterns of sleep.  Other common approaches are special diets, probiotics, and mineral and vitamin supplements, breathing exercises, and acupuncture.

However, what is first needed, before standard treatments or CAM,  is a tool that directly allows the addict to experience clearer thinking, discriminating and feeling. This process  gives control back to the addict to then be able to take control over his or her life  and act in a way that leaves him or her not only “feeling” in control of his or her life, but actually creating a life that then works for them to create a more powerful and productive future. This gives him or her greater purpose in life and a direction to start living a more fulfilling life.

Transcendental Meditation is one such evidence-based way to do this. Having gained more control, the individual can choose the useful tools to change his or her lifestyle to substitute positive activities for drug or alcohol addiction habits.  He or she may also choose to receive psychological counseling and/or pharmacology to support this change in patterns of behavior.

A 2007 study showed that the most commonly used CAM approaches were natural products, breathing exercises and meditation, according to NIH Center for Complementary and Integrative Health (https://bit.ly/2t2ChE1 )

Transcendental Meditation (TM), has been taught the same systematic way over the past 60 years, and is now practiced by over 7 million people in every country around the world. TM is a simple, effortless mental technique that employs the principle of rest and release of stress. The meditator experiences quieter, more silent and more restful levels of thinking, and the body gains profound rest and release of fatigue and stress. With increasing coherence of mind due to more silent and orderly thinking gained in meditation, after meditation the practitioner has more freedom from the influence of past decisions and he or she can then more easily choose to stop the destructive behaviors of drug and alcohol abuse. 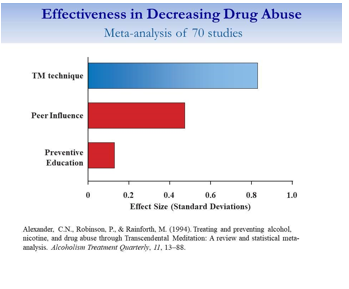 Over 10 peer-reviewed studies ( TM.org and then go to addictions link) show that TM produces a very significant reduction in drug and alcohol abuse. For example, one meta-analysis of 70 drug rehab study results (Alcohol Treatment Quarterly, 11: 13-88) showed that TM was significantly more effective than either peer support or prevention education.

Russell Brand comments (https://youtu.be/VXSIvShLujM ): “The thing is that what I have learned, what I was looking for all the time, was a sense of union, a sense of connection.

Why for us is there the subsequent misery? Because for us these flimsy scraps are never going to be enough. We want the real connection. We want the absolute connection. And the thing is that connection exists.  And, it’s possible to find it. And it’s possible that you in fact could find it now. First you have to remove the chemicals and the substances. You have to get rid of them. I believe in abstinence based recovery. I believe in harm reduction when necessary to get you to abstinence-based recovery, but I believe that if you are a drug addict of the nature that I am, you have to remove drugs from your life.

As Russell Brand said: “Through TM I felt this beautiful serenity and selfless connection.  There are those with great privilege and luxuries that can have access through TM, but there are people who are in extreme states of suffering who can benefit from it too.” (https://youtu.be/iHVBmrFnalM)

David Shapiro, B.A. cum laude chemistry, M.A., is an author of two articles published in Journal of Traumatic Stress (April, 2013; February, 2014) on Transcendental Meditation and PTSD; the founding President of PTSD Relief Now and its African PTSD Relief projects and Alliance for PTSD Recovery (both are 501C3 charities) ; author of a third article, in submission, on rapid reductions in PTSD in South African college students; and an author of numerous popular articles on PTSD published throughout the world. His previous articles in Elephant Journal include: Is Meditation the Answer to Trump’s Goal to Reduce Veteran Suicides? and The Simple Technique that dramatically Reduced PTSD Symptoms in Refugees. Thousands of refugees, at-risk students, military, abused women have received support from PTSD across Africa from PTSD Relief Now Corporation. To get updates on research and projects, sign up here https://t.co/5z6FcgSuIx

Join 5,944 other subscribers
Assignmentgeek.com Homework assistance created for you
Thesishelpers.com can write your thesis.